We are so proud and excited that Oakland voters passed Measure Z, 75% to 25%. Measure Z will protect hotel housekeepers from sexual assault and threats on the job, establish a living wage and humane workload limits, and improve labor standards enforcement for ALL workers in Oakland. Thank you to our partners in this campaign, East Bay Alliance for a Sustainable Economy, and to all or supporters.

Check out our very own Irma Perez and Wei-Ling Huber in this Telemundo story!

Listen to our very own Blanca Smith explain why every Oakland voter should vote yes on Measure Z. And she’s walking the picket line at the Oakland Marriott City Center while she’s at it! 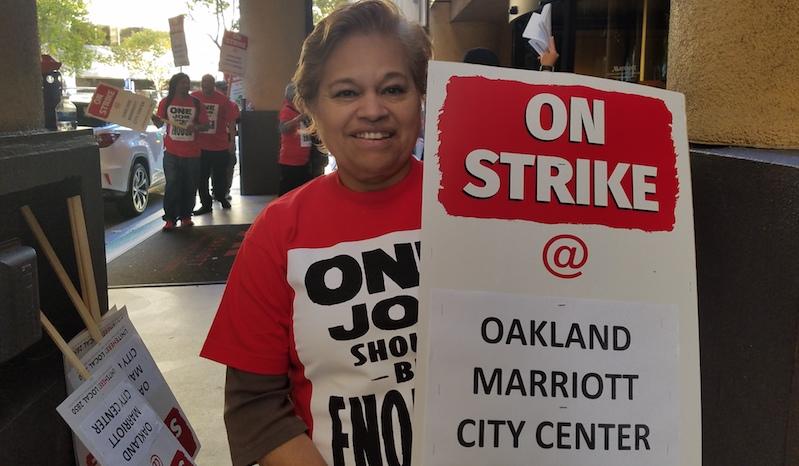 We’ve all heard a lot about the presidential election – but there are crucial races here in our own cities. Here are Local 2850’s endorsements for candidates and ballot measures that will protect good jobs and affordable housing in the Bay Area.

/wp-content/uploads/bg_branding.png 0 0 Local2850 /wp-content/uploads/bg_branding.png Local28502015-11-25 01:49:062015-11-25 02:23:33San Pablo Casino negotiations: 11/30/15
Dear Union Member:
As of midnight, April 30th, Interstate-Rim Management Company, LLC (“Interstate-Rim”) will no longer be manager of the Marriott Oakland.  Consequently, your employment with Interstate-Rim will end at 11:59 PM April 30, 2015.  In the event these dates change we will advise you.
The current owners in consultation with your union, UNITE HERE 2850, have requested that Interstate-Rim transfer your accrued but unused Sick and Hospitalization time to your new employer.  Also, the union and Interstate-Rim have agreed to allow you to roll over unused vacation to the new employer or to elect a payout of that vacation.  If you agree to have your unused Vacation time roll-over to the new employer, please complete a form (available from HR at the Marriott) acknowledging this process.  If you do not agree, check the box “I would prefer to have my Unused Vacation paid out to me”.  If you choose this option, a check will be mailed to your home address by May 8, 2015.  All elections must be received by end of day, Tuesday, April 28th or your election will default to rolling over your unused vacation to the new employer.
If you have any questions, please contact your union representative or manager.
/wp-content/uploads/bg_branding.png 0 0 Local2850 /wp-content/uploads/bg_branding.png Local28502015-04-27 15:45:562015-10-19 15:46:18Important Announcement for Oakland Marriott Workers

After a two-year struggle, nearly 200 restaurant workers at the Oakland Airport are celebrating their new union contract – which provides for raises, affordable family health care, and job security.

The workers struck in August 2013 to protest unfair labor practices by their employer, Host International, which included regressive proposals to freeze wages and slash benefits.

“Host wanted to turn our jobs into McDonald’s jobs that would leave our families in poverty. But we stuck together and fought back and won a great contract. Now I can take good care of my kids, and they can be proud knowing their mom stood up for them,” said concessions worker Nancy Moncada.

“We want to thank all our fellow Port workers, other unions, and friends in the community who stood with us for the past two years – we could not have won this victory without you.” Oakland Mayor Jean Quan dropped by the workers’ victory celebration on Tuesday. “Oakland should be a city where working-class families can survive and thrive – especially those working at the Port of Oakland. The airport food service workers have fought long and hard to make that vision a reality, and I congratulate them on their victory,” said Quan.

Under the new contract, non-tipped workers will receive 40-cent raises each year. An excellent health care plan will be available to workers for $10 a month for single coverage or $25 for full family coverage. Workers will also receive pension benefits, paid sick days, free meals, and one to four weeks of vacation per year.

The workers at Host are represented by UNITE HERE Local 2850; their previous contract expired in July 2012. Over the past two years, the workers have staged numerous protests and a one-day strike in their efforts to secure a fair contract.

“I hope this is an inspiration to all the people in Oakland and all the fast food workers out there who are struggling for a living wage. If you keep on fighting, you can win!” said Host worker Hong Mei Li.

Employees at non-union restaurants in the Oakland Airport also staged protests in 2012 and 2013, highlighting violations of the Port’s living wage policy. Earlier this year, the Port Commission adopted a policy that all new airport food and retail operators must sign labor peace agreements. Labor peace agreements may include guarantees of a fair process for workers to decide whether they wish join a union, free from employer interference or retaliation.

“It’s been a long fight, but the future is brighter for Oakland workers because of it,” said Local 2850 president Wei-Ling Huber. “The airport workers can teach us all what it takes to win good jobs for working-class families in Oakland.”